One of the biggest challenges for climate change mitigation is to enable emerging economies to continue lifting people out of poverty while at the same time reducing greenhouse gas emissions. The ITF’s Decarbonising Transport in Emerging Economies (DTEE) project helps governments of emerging nations to identify ways to reduce their transport CO2 emissions and meet their climate goals.

The DTEE project supports transport decarbonisation in Argentina, Azerbaijan, India and Morocco. It is designing a common assessment framework for transport emissions that will cover several transport sub-sectors and transport modes. Country-specific modelling tools and policy scenarios will help the participating governments to implement ambitious CO2-reduction initiatives for their transport sectors. Stakeholder workshops, training sessions, briefings for policy makers and mitigation action plans will stimulate further research and the development of policies beyond the duration of the project. 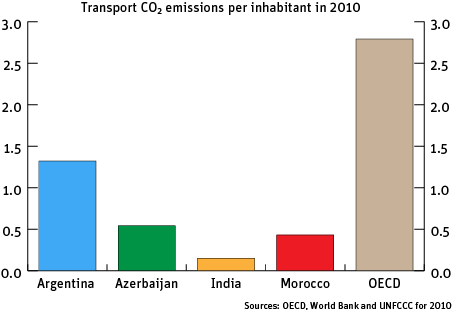 Transport CO2 emissions per capita in emerging economies are still well below the OECD average. In India, the CO2 emitted per inhabitant was almost one-twentieth that of an average OECD country. Thus, an average person in India contributes less CO2 in a year than someone taking one transatlantic roundtrip flight. 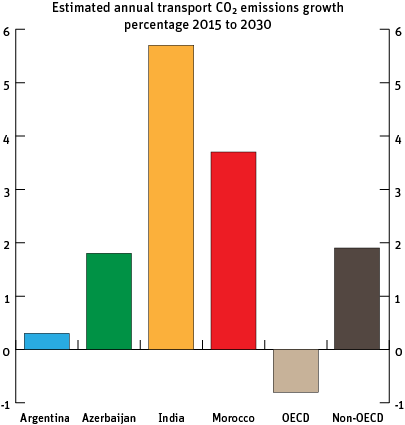 Emerging economies can hardly be expected to curb their economic development and stop improving living standards as the price for limiting climate change. The challenge is therefore to accommodate the growing transport demand that often comes with economic development in an environmentally sustainable way.

To tackle this challenge, the International Transport Forum, in collaboration with the Wuppertal Institute (WI) and supported by the International Climate Initiative (IKI) of the German Federal Ministry for the Environment, Nature Conservation and Nuclear Safety (BMU), is carrying out the Decarbonising Transport in Emerging Economies (DTEE) project.

In the context of the ITF’s wider Decarbonising Transport (DT) initiative, the DTEE project will help governments of emerging countries to establish pathways to reducing transport CO2 emissions and meet CO2 reduction pledges under the Paris Agreement.

The participating countries are Argentina; Azerbaijan; India, and Morocco. For them, the ITF will design a tailor-made transport emissions assessment framework. This will account for all the countries’ relevant characteristics including their development plans, and enable governments to better understand current and future transport activity and related CO2 emissions. Modelling tools and policy scenarios will help to identify effective transport CO2 mitigation measures.

The project team works in close cooperation and coordination with the participating countries’ government agencies, local decision-makers, researchers, other experts and civil society organisations. Stakeholder workshops, training events and the dissemination of project findings will help build capacity for future transport research and policy development well beyond the duration of the project.

The four participating countries represent a wide range of challenges for the decarbonisaton of transport in emerging economies. They differ with regard to world region, economic specificities and infrastructure characteristics. They share similarities in that all four have lower transport CO2 emissions per capita than the OECD average, but higher growth rates of transport activity. In all of them, meeting increasing transport demand while reducing CO2 emissions is a critical challenge for policy makers.

This project is part of the International Climate Initiative (IKI). The Federal Ministry for the Environment, Nature Conservation and Nuclear Safety (BMU) supports this initiative on the basis of a decision adopted by the German Bundestag. 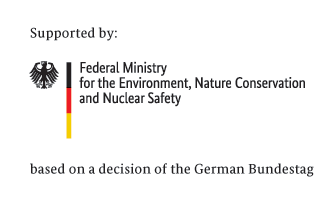