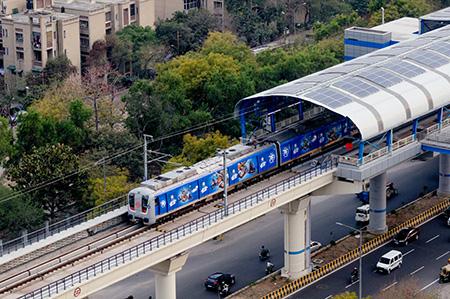 India is the world’s second most populous country and the world’s seventh-largest economy. Around one third of Indians live in cities. Its economy is diversified and among the global players in agriculture, industry, services and manufacturing.

India emitted around 2 300 MtCO2eq in 2016. This made it the third-largest contributor to global greenhouse gas emissions after China and the United States. Emissions per capita were among the lowest of the four focus countries of this study, however, at 1.5 tonnes of CO2eq (2010). This was almost one-eighth of the OECD average.

India’s Nationally Determined Contributions (NDCs) reflect that transport is one of the authorities’ main action areas for decarbonisation, even if no specific mitigation target is set for the transport sector. The overall target is to reduce the emission intensity of the country’s GDP by between 33% and 35% to 2030, compared to 2005. Transport currently contributes to around 10% of India’s total fuel combustion emissions. Carbon emissions for the transport sector per capita have increased, however, and reached  0.15 tonnes of CO2eq in 2010. Again, this is the lowest level among the four focus countries in this project and 19 times lower than average OECD levels for that year.

Transport activity in India will continue to increase. Freight volumes will grow by 6% annually and passenger volumes by 7% between 2015 and 2030, according to ITF estimates. This corresponds to around three times the estimated rate of increase of transport volumes in OECD countries for the same period.

Urban mobility provides some of the main challenges for decarbonising transport in India. Most Indians will live in cities in 2050, while in 2014 only about one third was urban dwellers. This massive increase in the urban population coupled with rising living standards and increased demand for motorised transport will make it a challenge to meet urban mobility needs in a sustainable way. If it is not met, drastic increases in emissions will cause climate change and local pollution. Mastering it requires enhanced transport infrastructure, increased public transport supply and renewal of the vehicle fleet with  energy efficient, notably electric, models. Also, issues of data availability need to be tackled.

DTEE India is a part of ITF’s work on Decarbonising Transport in India that also includes NDC Transport Initiative for Asia (NDC-TIA).