The gross fixed capital formation (investment) in inland transport infrastructure as a percentage of the Gross Domestic Product (GDP) remained stable at 0.7% in the OECD in 2019. The aggregate level has been constant since 2014, after declining from a peak of 0.9% in 2009. The OECD aggregate does not include Chile, Ireland, Israel, Korea, the Netherlands and Portugal. Also, for the aggregate calculation, data are estimated for Australia, Belgium, Canada, Denmark, Iceland, Italy, Japan, Luxembourg, Norway, Poland, Slovakia, Switzerland, Turkey and the United States. 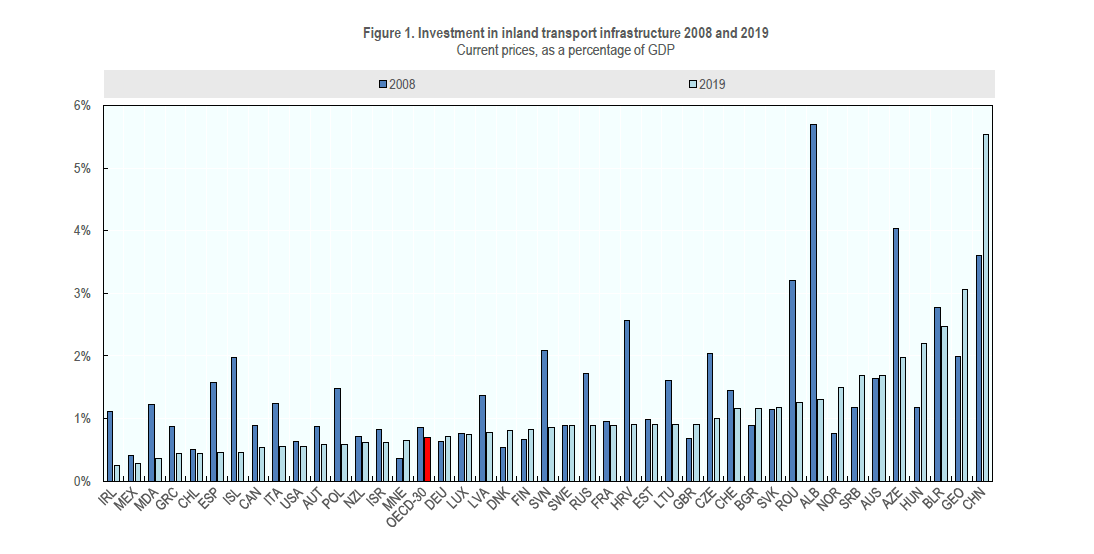 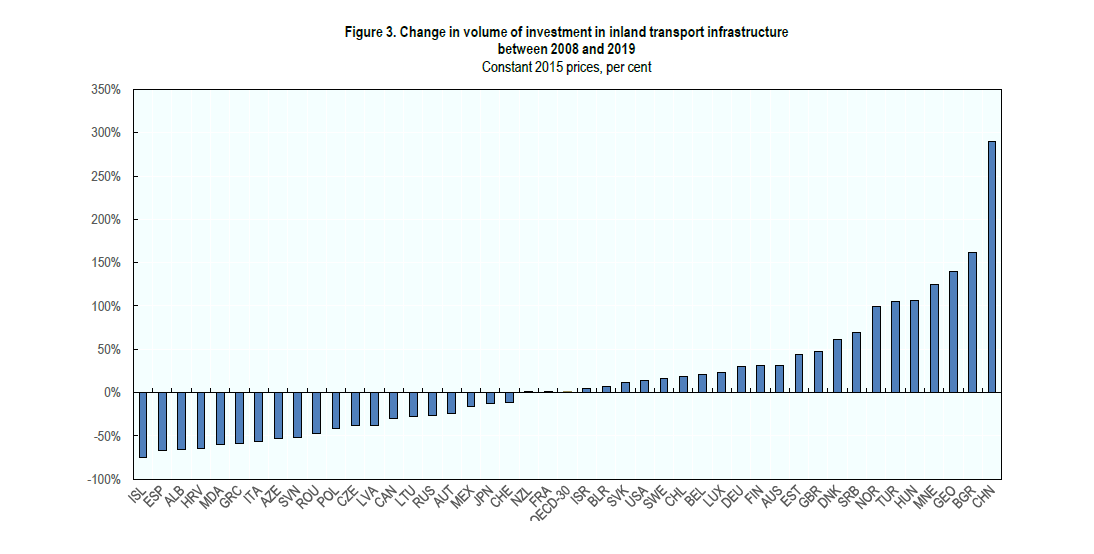 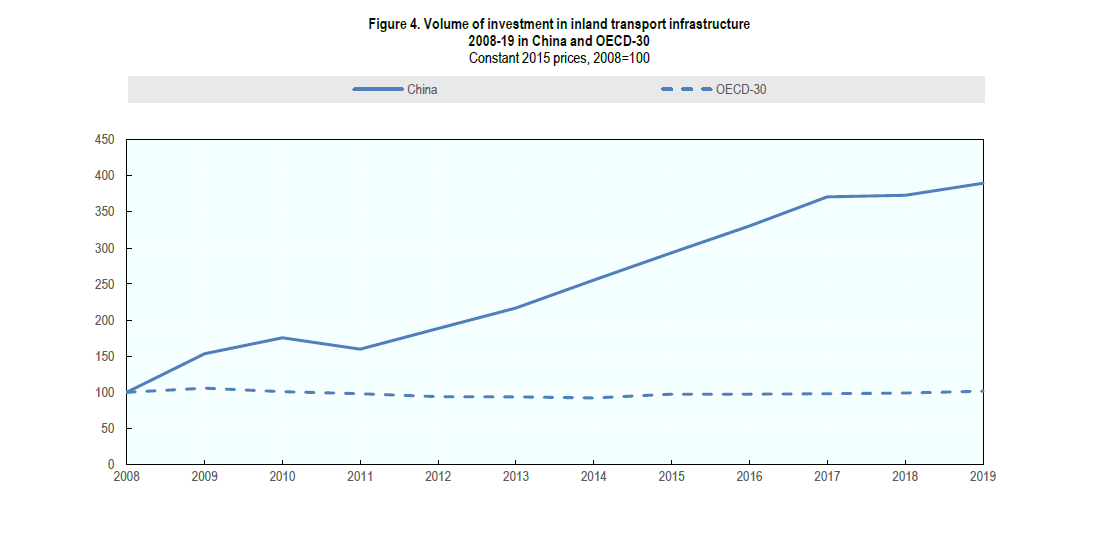 Conversely, the increase in road shares of inland transport investments in Georgia and China were due to road investments nearly doubling in the former and quadrupling in the latter. Among the countries with declines in road shares of inland transport infrastructure investment between 2008 and 2019, Slovenia and France invested less in roads (-73% and -38%) and more in rail (+99% and +119%) in constant 2015 prices. Croatia’s stagnation in rail investment is coupled with a decrease in road investment (-71%), both leading to a reduction in the road share. 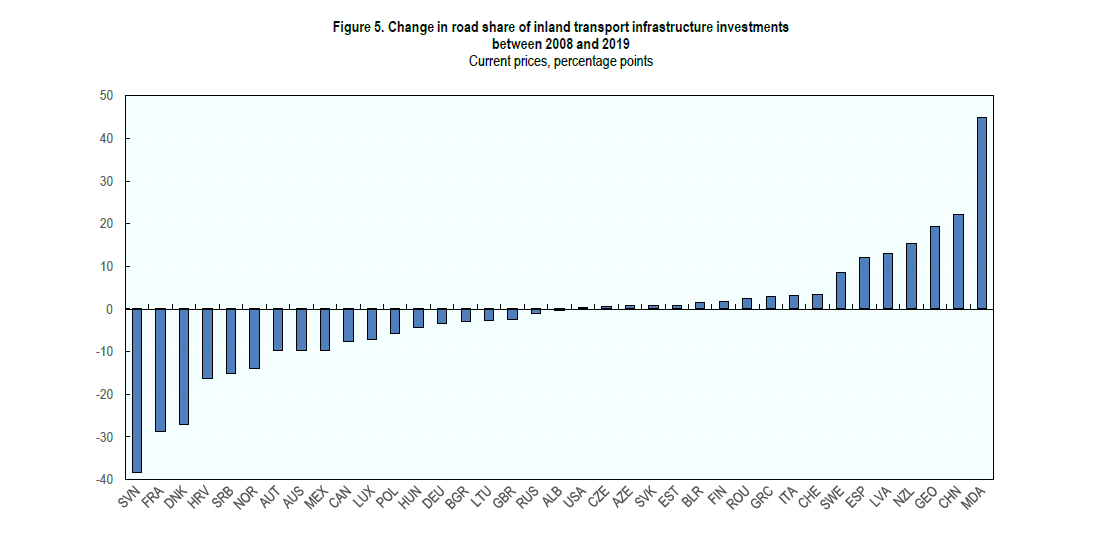 Efficient and timely maintenance of roads is critical to ensuring their prolonged use and the safety of road users. The ITF report “Policies to Extend the Life of Road Assets” (2018) recommends 12 measures for extending the life span of road assets.

It is essential to highlight that numbers only include public maintenance expenditure for most countries. It is near impossible for authorities to track and collect private maintenance expenditure. This gap in the data coverage can lead to misinterpretation of real maintenance levels, especially for seaports, airports and the road sector, where the private sector often covers most maintenance. Therefore, data analysis should consider trends, rather than levels. The lack of data on private road maintenance expenditure makes it difficult to verify the possible underfunding of road assets.

When looking at historical series, the available data suggests that the balance between road maintenance and investment has been relatively constant over time in all ITF  countries with available data. However, there are significant variations at country level, as shown in Figure 5. 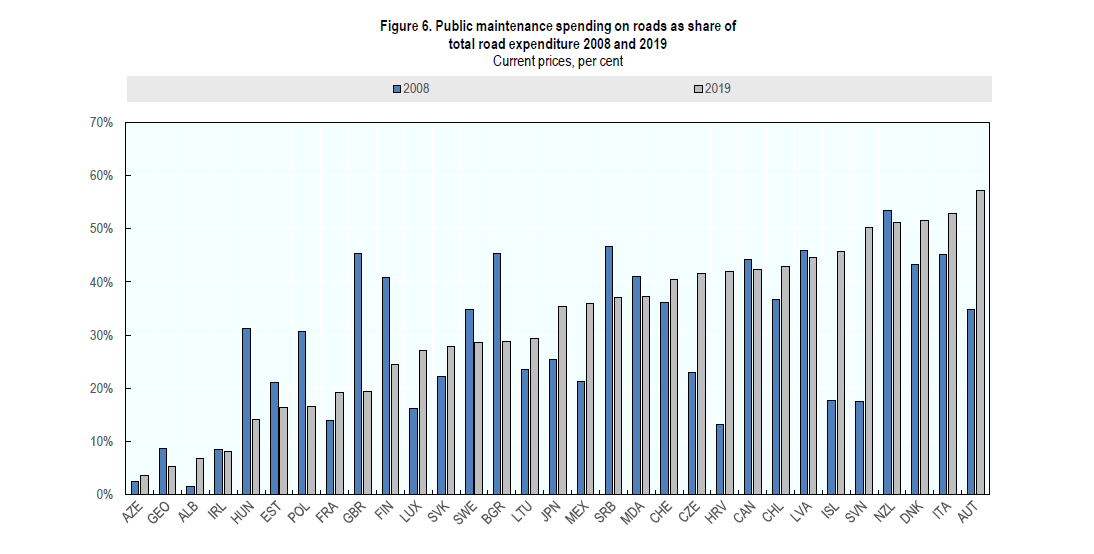 With an increase of 74% in constant 2015 prices, Norway saw the most visible growth in the capital value of roads among countries with available data between 2008 and 2019 (Figure 6). During the same period, Norway increased road investment (+68%) faster than all other countries included in Figure 6. In New Zealand, the capital value of roads grew by 78% between 2008 and 2019. Most of this growth took place since 2017 (+ 56%) and coincides with increases in road investment and road maintenance spending in constant prices between 2017 and 2019 (+18% each).

The International Transport Forum statistics on investment, maintenance expenditure and capital value of transport infrastructure for 1995-2019 are based on a survey sent to ITF member countries. The survey covers total gross investment (defined as new construction, extensions, reconstruction, renewal and major repair) in road, rail, inland waterways, maritime ports and airports, including all sources of financing. It also covers maintenance expenditures financed by public administrations and the capital value of transport infrastructure.

The ITF Secretariat collects data from member countries in national currencies, which are then converted to current prices and constant euros. Significant efforts have been devoted to collecting relevant deflators needed to calculate the constant euro equivalent of data provided, since no purchasing power parity corrected general index for transport infrastructure investment exists. Where available, we use a cost index for construction on land and water. Where these indices are not available, we use a manufacturing cost index or a GDP deflator.

Despite the relatively long time series, these data are often dogged by definition and coverage inconsistencies between countries, making international comparisons difficult. For the capital value data in particular, there are notable differences in the precision of estimation methods. The capital value of infrastructure is most commonly estimated using historical cost accounting with the perpetual inventory method (PIM) or current cost accounting, which evaluates the current value of all assets. We therefore advise caution when making comparisons of data between countries and instead recommend comparisons of trends. Furthermore, when analysing the capital value data or indicators such as the inland transport infrastructure investment share of GDP, it is important to take into account factors including: the quality and age of existing infrastructure; the maturity of the transport system; the geography of the country; the transport-intensity of its productive sector and its transport infrastructure developments.

If you would like to receive more information about this Statistics Brief, please contact Ms Ashley Acker (ashley.acker@itf-oecd.org) or Ms Aurélie Kopacz (aurelie.kopacz@itf-oecd.org). Detailed country data for inland modes, maritime ports and airports, plus more detailed data descriptions and notes on the methodologies, are available at this link.

This document, as well as any data and map included herein, are without prejudice to the status of or sovereignty over any territory, to the delimitation of international frontiers and boundaries and to the name of any territory, city or area. The statistical data for Israel are supplied by and under the responsibility of the relevant Israeli authorities. The use of such data by the OECD/ITF is without prejudice to the status of the Golan Heights, East Jerusalem and Israeli settlements in the West Bank under the terms of international law.

Published every two years, the ITF Transport Outlook provides an overview of current trends and near-term prospects for the global transport sector based on the ITF’s in-house modelling. It provides...

The Covid-19 pandemic has changed how people live and move, especially in urban environments. As many cities transition towards living with the virus, this presents challenges and opportunities to...

ITF Secretary-General Young Tae Kim leads an ITF delegation to Uzbekistan. During the mission, ITF experts will present the findings of study of the feasibility of implementing sustainable urban...

Working Group on Sustainable Accessibility for All

Accessibility has been a topic of growing interest in transport planning and policy making in recent years. The International Transport Forum (ITF) Working Group on ‘Sustainable Accessibility for All...