- While most regions saw minimal change in rail freight flows since 2010, rail tonne-kilometres declined in the large majority of ITF countries with available data between 2018 and 2019 (Figure 1).

- Passenger car demand increased in nearly all countries with available data between 2010 and 2019 (Figure 3).

- Russia, Japan and Korea reduced road fatalities the most among countries with available data, when comparing compound annual growth rates between 2010 and 2019 (-4.9% and -4.8%; Figure 4).

While most regions saw minimal change in rail freight flows since 2010, rail tonne-kilometres declined in the large marjority of ITF countries with available data between 2018 and 2019. Rail freight trends from 2010 to the latest data have remained quite stable in Europe, Japan and Korea, the People’s Republic of China and North America, all of which have compound annual growth rates for the data shown of less than one percent (Figure 1). The Russian Federation visibly increased rail tonne-kilometres between 2010 and 2019, with a compound annual growth rate of 3%. Rail freight grew at an even faster rate in Australia and New Zealand (8%), although data are only available through 2016 for those countries. Argentina and Chile have seen a stronger decline in railway freight movements than the any other region or country in the graph between 2010 and the latest 2017 data (-4% compound annual growth rate). In terms of the percentage of increase in rail tonne-kilometres between 2010 and the latest data shown, there was mainly growth in Australia and New Zealand (+59%) and Russia (+29%), as well as a decline in Argentina and Chile (-24%).

The latest available data show increases in road tonne-kilometres since 2010 for all countries and regions in Figure 1. China and Russia had the fastest growth, with compound annual growth rates of 6% and 3% from 2010 to 2018 and 2019 respectively. Growth can also be seen in the available data for Australia and New Zealand, Europe and North America, each of which has a compound annual growth rate of 2%. In terms of volume of growth, road tonne-kilometres increased by 64% between 2010 and 2018 in China. The strongest inclines in volume of road freight from 2010 to 2019 were in Russia (+32%), Europe (+20%), and Australia and New Zealand (+18%).

Inland waterway freight flows mainly increased in China and Russia, which have compound annual growth rates of 10% and 2% between 2010 and the latest data. In terms of the percentage of growth since 2010, China more than doubled tonne-kilometres in 2018 and Russia saw growth of 22% in 2019. Inland waterway freight has been relatively stable in Europe and the United States since 2010. 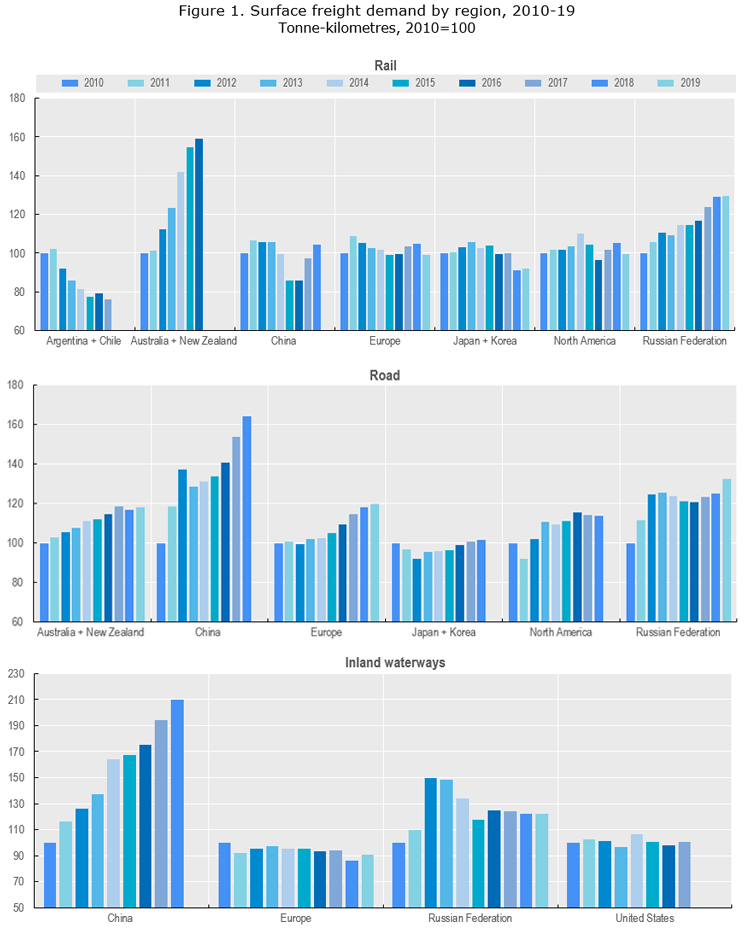 Container shipments in sea ports grew consistently between 2010 and 2019 in OECD countries, both in terms of gross tonnage and TEUs (+50% and +42%; Figure 2). In 2019, nearly 2.6 billion tonnes and 200 million TEUs were loaded and unloaded by OECD countries with available data. When comparing the compound annual growth rates between 2010 and 2019 for the countries included in the aggregate, TEUs increased most in Greece (20%), Poland (11%) and Lithuania (10%). Maritime gross tonnage had the highest compound annual growth rates during the referenced period in Greece (20%), Poland (13%), Slovenia (11%) and Lithuania (10%). 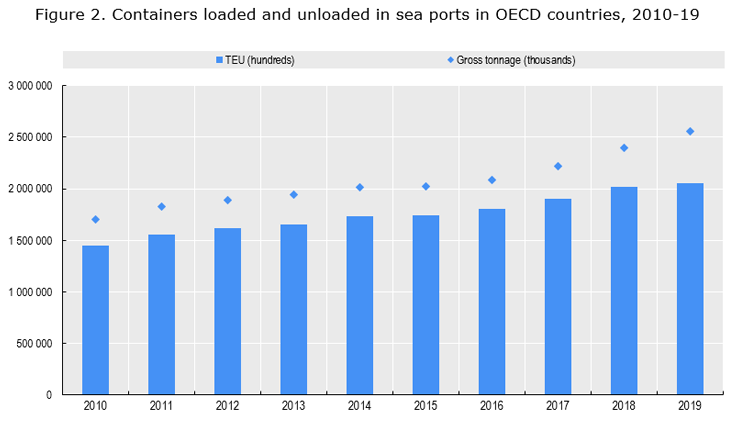 Passenger car demand increased in nearly all countries with available data between 2010 and 2019 (Figure 3). The strongest growth in car use was in North Macedonia, which has a compound annual growth rate of car passenger-kilometres of 8% during the referenced period. There were also notable growth rates in Iceland (5%), the Russian Federation, Poland, the Czech Republic and Hungary (all 3%). The International Energy Agency 2019 data on global car sales show the first signs of decline of the past decade and sales are predicted to decrease further in 2020, which could slow growth in car use in many regions. However, much remains uncertain as travel behaviours worldwide are shifting due to Covid-19. The long-term travel trends resulting from the pandemic are still unclear and will depend on the transport policies of the coming years 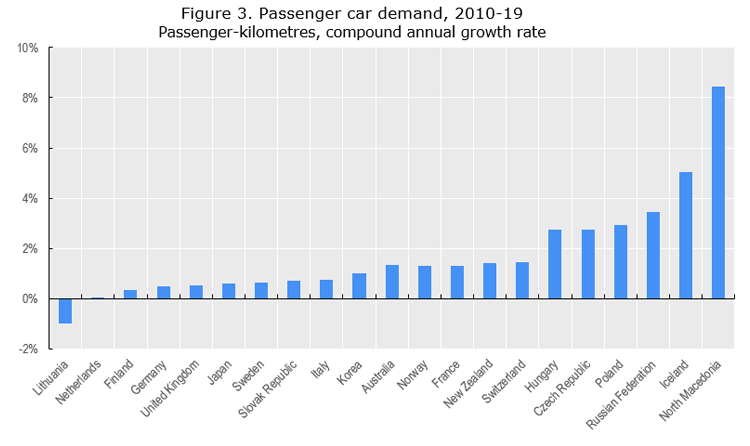 Note: 2018 data were used to calculate rates for Australia, Germany, Iceland, Korea, Lithuania, the Netherlands, the Russian Federation and the United Kingdom.

While most regions in Figure 4 succeeded in reducing the number of road fatalities since 2010, the declines are minimal in some cases and trends have not been consistent. In terms of compound annual growth rates for the countries and regions shown through 2019, there were declines in Russia (-4.9%), Japan and Korea (-4.8%), Europe (-2.3%) and Australia and New Zealand (-1.2%). Road fatalities increased slightly in Argentina and Chile (0.4%) and North America (0.3%), when comparing compound annual growth rates of data shown. Japan and Korea is the only aggregate that has consistently decreased road fatalities each year since 2010. 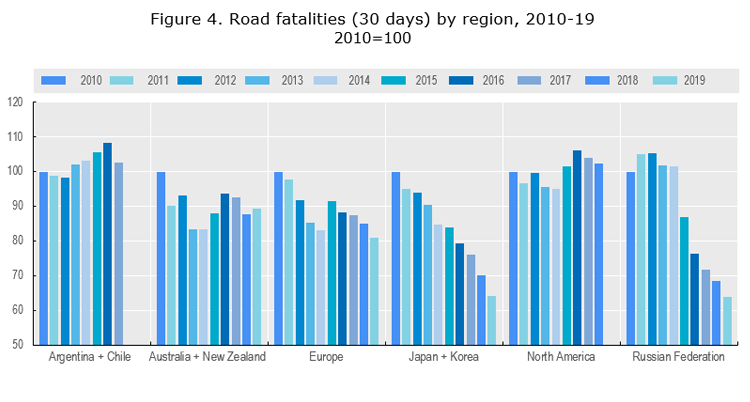 The data presented in this brief are from the ITF survey “Trends in the Transport Sector”, which includes variables on freight transport, passenger transport and road safety. Freight transport data include inland transport of goods (tonne-kilometres), containers transported by rail and sea (tonnes and TEU) and short sea shipping data (tonne-kilometres). Passenger transport data include passenger-kilometres for road (passenger cars, buses, and coaches) and rail. Road safety data include the number of road accidents, injured, and fatalities (30 days). The data series start in 1970 and continue until the current year-1, or the most recent available data. The survey is completed by member countries, processed by ITF statisticians and published each year, the 31 October.

Although there are clear definitions for all the terms used in this survey, countries might have different methodologies to calculate tonne-kilometre and passenger-kilometres. Methods could be based on traffic or mobility surveys, and may use very different sampling methods and estimating techniques, which can affect the comparability of the statistics. Additionally, while the definition of road fatalities is consistent across most countries, this is not the case for road injuries. Not only do countries have different definitions, but there is underreporting of road injuries. However, data for individual countries are usually consistent over time and useful for identifying underlying trends. It is recommended to read the metadata in order to check the coverage of data for each country.

If you would like to receive more information about this Statistics Brief, please contact Ms Ashley Acker (ashley.acker@itf-oecd.org). Detailed data descriptions and notes on the methodologies are available at the following links.