Signs of recovery in global trade since August 2020

The latest update of global freight data collected by the International Transport Forum at the OECD for the period including June 2021 shows the following:

The Covid-19 pandemic had a major negative impact on air and sea trade between April and July 2020, according to preliminary seasonally adjusted data (Figure 1). Since August 2020, air and sea trade has started to recover.

Exports to BRICS countries and Asia have been the locomotive of European and North American growth since the crisis of 2008. In May 2021, exports by sea from the EU27 to BRICS were 91% above pre-2008 crisis peaks, to Asia they were 86% higher. US exports by sea to BRICS almost doubled. By contrast, air-borne exports to Asia from the EU27 and the US have slowed down as Covid-19 hit the world (Figures 2-5), but recovered quickly.

Data on the value of US trade with Mexico and Canada by rail and road did not show a significant impact of the Covid 19 pandemic. Similarly, EU27 trade with neighbouring countries was not too much impacted by Covid-19 (Figure 6). In ITF countries with available data, rail and road freight transport has a minor decrease in the second quarter of 2020, but since the third quarter of 2020, it has recovered (Figure 7). In China, rail freight transport was not impacted by the pandemic (Figure 8). 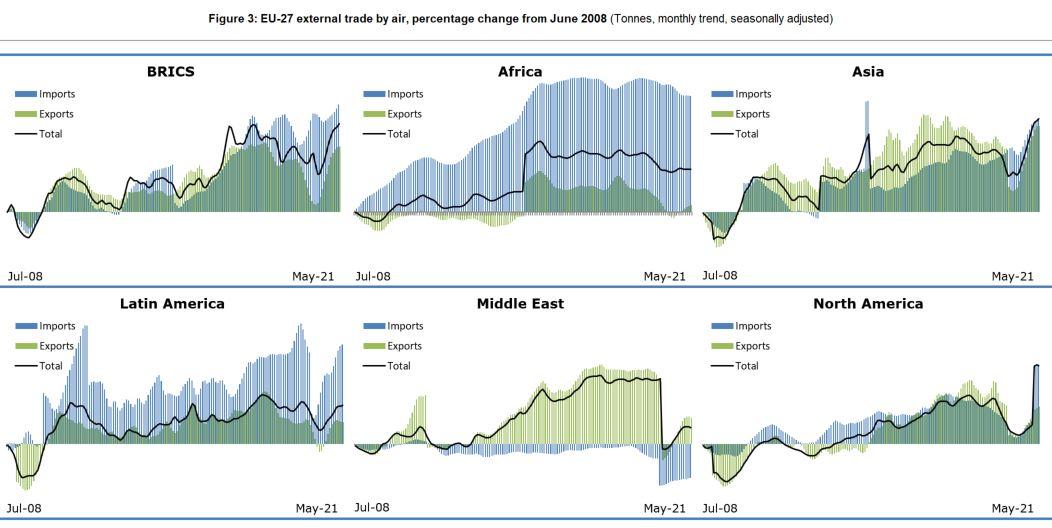