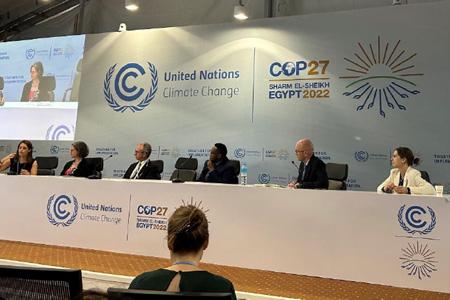 The ITF team led a strong transport presence at the COP27 negotiations in Egypt. The talks delivered positive results in some areas, notably with the perennial question of funding finally addressed with the agreement of a "Loss and Damage" fund.

The 2015 Paris Agreement target of limiting climate heating to +1.5 degrees remains ITF's goal and benchmark. There were clear disappointments in Sharm el Sheikh in this regard.

While 98% of countries mention transport as part of their official plans to decarbonise – the NDCs -  only a fraction have a plan for green mobility. Since the UK-hosted COP26 last year, only four additional countries now include an actual target for reducing transport CO2 emissions. Only 35 of the 194 COP parties have such a target, just 18%.

We continue to ask, "How serious are countries about decarbonising transport?". You can see the results in our Transport NDC Tracker, which is updated monthly.

Transport: a quarter of all emissions

COP27 was a step backwards for transport's visibility at the climate negotiations. Transport ministers were not at the negotiating table in Egypt despite the sector accounting for a quarter of all man-made CO2 emissions. ITF continues to work for a substantial ministerial presence at the next COP in the United Arab Emirates, an ITF member.

The next ITF Ministers' Roundtable on Transport and Climate Change takes place at the ITF Summit from 24 to 26 May 2023 in Leipzig, Germany. Ministers will have the chance to discuss future transport emissions projections following the release of the ITF Transport Outlook during the Summit. See preliminary 2023 Summit information and newsletter sign-up

ITF welcomes the Egyptian COP Presidency's goal of a sustainable transition based on the "avoid, shift, improve" approach, which aligns with ITF's work, including the Transport Outlook. A comprehensive approach is needed by all parties to “keep 1.5 alive”.